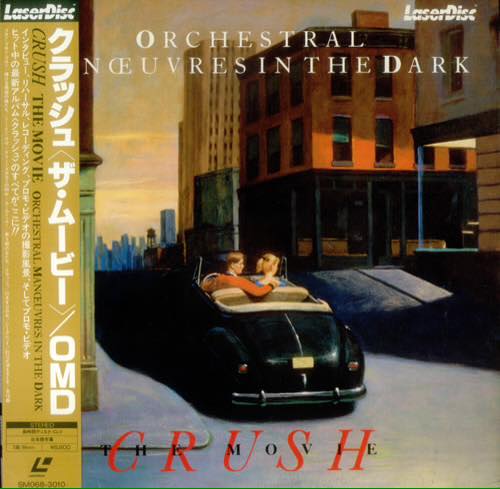 Essentially a (mockingly-titled, according to the official OMD biography) documentary about the conception and recording of OMD's sixth album 'Crush', this hour long feature film gives us- amongst other things- interviews with various members of the band, clips of the group recording in the studio itself, and music videos for songs taken from the album.
At best, it is charming (moments like Andy and Paul's recital of Not The Nine O'Clock News's 'Super Trouper' parody), amusing (particularly Mal Holmes' sharp one-liners) , informative (most notably the discussions about the recording of the album) and provides the viewer with some great performances by the band ('Women III' and 'The Native Daughters of the Golden West' in particular).
However, the film also serves as a reminder of just how much OMD have changed as a group over the years- and whether it is for better or worse is debatable. Whilst they were once known for writing what can only be described as nothing less than synth pop classics ('Enola Gay', 'Electricity' and 'Messages' to name a few), 'Crush: The Movie' reveals to us in just how much the group had bowed to the commercialism of the American market in the mid-80s.

The particular offender here is lead single 'So In Love', which (as a rather soppy, weak number) was certainly not akin to any of the band's previous singles at the time of its release. As well as the rather syrupy song itself, there's also the accompanying video, which not only cost the band £30,000 to make, but also seemed too convoluted to actually be serious, with McCluskey walking around a deserted Spanish village with a recently-acquired, brightly-coloured walking stick, Humphreys driving around the desert in a white car, and no one seeming to have the faintest idea what's actually going on.

In short, if you like 'Crush' the album, then this film will tell you everything you want to know about the making of it- and more. If, however, you're not a fan of the album itself, this film will most probably only serve to remind you of the reasons why