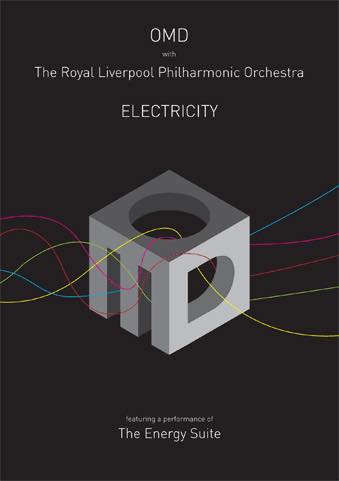 (Released 14th December 2009)
Running Order
(Disc 1):
Radio Prague
Messages
Souvenir
Joan of Arc
Joan of Arc (Maid of Orleans)
All That Glitters
La Femme Accident
Talking Loud and Clear
Dream of Me (Based on Love's Theme)
Walking On the Milky Way
The Native Daughters of the Golden West
Sailing On the Seven Seas
Enola Gay
Electricity
The Romance of the Telescope

You'd think that a band with a name like 'Orchestral Manoeuvres in the Dark' would automatically try to incorporate the various instruments of an orchestra into as much of their music as possible. As usual though, OMD defy expectations, as this isn't necessarily always the case; although the occasional song of theirs will have instruments like cellos ('La Femme Accident') or violins ('If You're Still In Love With Me') as the main focus of the music, they are primarily, of course, a synth band, and known primarily for their more choral-orientated sound.

This DVD of the group's concert with the Royal Liverpool Philharmonic Orchestra, however, showcases not only their versatility as performers, but also the true beauty and musicianship behind some of their most well-known songs. The set itself mainly comprises of OMD's greatest hits, with classics like 'Enola Gay', 'Souvenir' and 'Joan of Arc' being given the orchestral treatment, much to delight of the audience present. It is, however, some of the lesser-known tracks that shine through the most. The subtlety of 'Talking Loud and Clear', for example, and even more so the majesty of 'The Native Daughters Of the Golden West' (an album track from 1985 LP 'Crush'), with its soaring verses perfectly complimenting the grandiose orchestration.
Also, as if disc 1 wasn't enough, the added bonus with this DVD is the Andy McCluskey/artist Peter Saville/filmmaker Hambi Haralambous-devised 'The Energy Suite'- a visual/audio project depicting power stations in England and Wales through some unique uses of sight and sound. The display of film footage was also previously shown as an exhibition at the Foundation for Art and Creative Technology (FACT) in Liverpool, from December 2008 to February 2009. Overall, although it is the first disc that is probably the more entertaining for OMD fans, the additional features on the second disc also help to make this package something more than just a live concert DVD- proving that OMD, once again, are able to defy expectations. Furthermore, having initially heard about this performance but never listened to it, I was rather dubious- how could any other versions of the songs compare to the original recordings? In actual fact, however, I was pleasantly surprised- and think the majority of OMD fans will be as well.