All throughout the day I was checking Facebook, the word on the street was Andy had septic tonsillitis and my heart sank, I work as a Paramedic and the word septic is not one that ever fills me with joy.

Still my course during that day was fragmented with hopes that all will be well, a message popped up “OMD do not cancel gigs” … so we are on then.

Getting home, putting an old tour t-shirt on and going to the gig with my eldest son (22) and a good friend all of us eagerly anticipating the night ahead. In the 34 years of watching OMD live I never imagined back on 1983 that I would still be as enthusiastic in my late forties as I was a 14year old kid, well I am probably more so now.

I remember back in 1997 meeting Andy at an OMD convention when he said “OMD was over”, at the time he was right but how the phoenix has risen into this beautiful renaissance and rekindled the love affair with a blend of music that will forever be the soundtrack of my life.

Meeting some old friends in the bar beforehand, everyone was feeling the anticipation and excitement … nothing could have prepared us for the 90 minutes to come.

The lights go down … Art Eats Art and La Mitrailleuse guide us into Ghost Star (so much better live) Andy waits until his moment to sing and the audience captivation begins … into Isotype …the lighting … the sound unrivalled and yet a small mistake from Andy leaves him saying “ I hope it’s not going to be one of those nights, I promise perfection from here on in” and boy did he mean it.

The sprinkling of the new songs mixed with a back catalogue of hits just left a spellbinding impression, my son turned to me and said, “god they are so musically tight” he does sound technology, he knows, we all know they have as a band become masters of their craft.

If ever there was evident proof of the draw of their catalogue it would be Joan of Arc, follow by the utterly brilliant Maid of Orleans which simply raised the roof in a perfect moment of band to crowd, crowd to band appreciation ceremony lasting a couple of minutes both in awe of each other, a special mention to my new hero Mr Stuart Kershaw, simply a brilliant drummer who is I am sure honoured to be part of the band but will also play homage to his predecessor Mr Holmes who can no longer play but in Stu they have found the perfect replacement, he seemed to be having the time of his life and singing along to the songs we all hold so dear, his drumming on Maid of Orleans was breathtakingly brilliant. 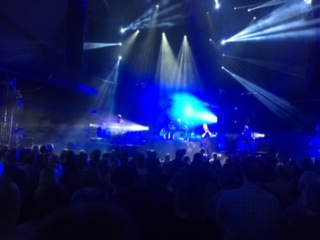 As the set rolled out, you know you are getting closer to the end, but with each hit, Locomotion, Forever Live and Die, So in Love and SOTSS the crowd interaction got louder, the crowd singing along … the band having fun and all riding on a crest of wave that had the whole place wrapped up in a moment of sheer joy, my special moment has to be “of all the things we made”, all four standing there at the front in a simple undramatic way playing a song that just encapsulated everything wonderful about them as a band drawing all of us close to them to make us all part of the show.

For Paul and Martin, they are so in sync, so perfect in their work, Martin doesn’t seem to seek the limelight but is clearly the most vital cog in this wheel for he just goes about his work and provides that piece of the jigsaw that blends it all so well, and yes, the man can still play that sax with consummate ease.

So, after the finale of the main set, Enola Gay as always just perfection, the encore medley, giving Paul his fourth song of the night, before the oldest and fastest Electricity leaving us all in awe of the four men playing so beautifully for our joy.

The end of the gig, Stuart standing taking photos of the crowd from behind his kit, was it so uplifting for him to do that as it was for us watching, I hope so. Andy’s words at the end, “you know we will be back right”, well I hope they are, the joy the band seem to get only matched by our own, and even though they didn’t play Kiss Kiss Kiss my favourite off the new album they allowed me, my son and good friend to experience something so rare these days, honest, wonderful entertainment that simply showed them as a band for what they are … as my friend said “phenomenal” … yes Matt they are.

Many thanks to Mark Dawn for sending this to us.