Crush by Orchestral Manoeuvres In The dark

Crush by Orchestral Manoeuvres In The dark 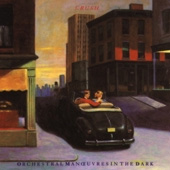 Crush by Orcestral Manoeuvres In The Dark

'Crush' was always an album that was clearly aimed at the commercial American market; not only was it was the first of OMD's albums to be produced by an American (Stephen Hague, who would go on to work with the slick, perfectionist sounds of New Order and the Pet Shop Boys), but it was also the first of their albums to include blatant love songs ('Secret', So In Love' and 'Hold You' being the primary examples). Hearing the album compared to the previous year's bittersweet, reggae/funk-influenced offering 'Junk Culture', it almost sounds like two different groups, the only linking factors being McCluskey's heartfelt vocal delivery and the prominent brass section.

However, this wasn't necessarily a bad thing. Whilst considerably more commercial, and as far away from their original sound than OMD had ever been, 'Crush'- so titled 'because of the number of love songs amongst the material'- is stuffed to the brim with catchy choruses (So In Love, the group's first hit in the US), detailed, descriptive lyrics (Women III) and powerful drums (The Native Daughters of the Golden West).

The mockingly-titled accompanying docu-film about the making of the album 'Crush - The Movie' is also worth a watch, even if just for Malcolm Holmes' knife-sharp one-liners. 'What do you think of Spain, then?' The interview asks him (the band are there to film a music video). 'Well...it'll be nice when it's finished!' he replies.